The ‘Tathra Trash Trackers’ are an amazing group of Stage 3 students from Tathra Public School. They completed a waste audit with BEEC in Term 3, 2019. The students were already sorting their waste into recycling, FOGO and landfill at school – so each of the three bins were sorted to determine the contamination rates in the bins. It was amazing to see that the FOGO had 0% contamination. Fantastic work Tathra Public School! What the students did find was FOGO items in both the other bins, the recycling bin had lots of contamination and there was a large percentage of soft plastics in the landfill bin.

One inspiring group of students had also spent two days collecting all the litter in the playground. They identified that out of 271 litter items collected and sorted 59% were landfill items (mostly soft plastics), 34% recyclable items and 7% FOGO. At least 40% of the total amount of litter collected was soft plastics.

The students decided that the biggest waste issues that needed solving at school were:

Students have also worked on action plans to introduce bin monitors, educate other students and create a bin station and signage for all the bins. 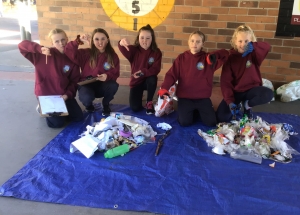 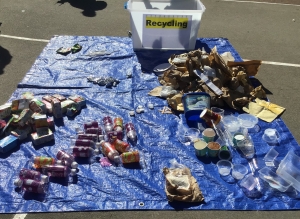 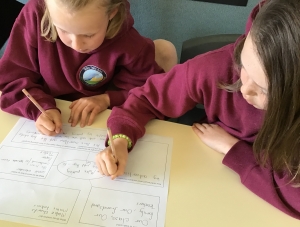 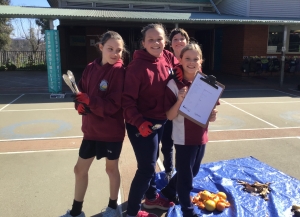 Tathra Public School has received funding from the Bega Valley Shire Council to enable them to purchase a 3 waste bin station, t-shirts and materials for the students so they can work as bin monitors, equipment so the school can run their own waste audits and prizes to encourage students to do the right thing with their waste.

This funding will allow the school to begin to put some of their action plans into place.

Once the program has begun, the emphasis will be on students taking responsibility for their waste. Students will also be able to offer support and education to other students to promote a culture of responsibility when it comes to waste. The project will promote waste free lunches, offer random prizes for waste free heroes which will help reduce plastic waste within the school.

The Tathra Trash Trackers completed their final waste audit on the 1st of December, 2020.

The students have created and designed characters for each of the three bins. These are clearly labelled in the school’s new painted and decorated bin bay. Bin monitors have been introduced with student designed Trash Tracker vests.

The Trash Trackers have already recruited their team for next year, with the new group running the final waste audit for 2020.

The results of the audit found:

The students and teachers at the school are all actively participating in the program. The new group of students who will be responsible for the program in 2021 have already taken ownership of the Tathra Trash Trackers and it will be great to watch their progress and implementation of new ideas next year. The painted bin bay in the school eating area is an ongoing reminder to all students about waste sorting and will be an ongoing feature of waste education in the school.