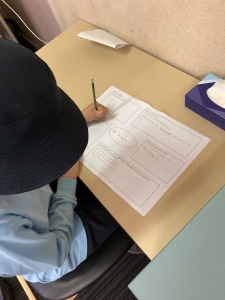 The Pambula Plastic Patrol at Pambula Public School took on their waste challenge with an audit of playground rubbish on 29th July 2021. The students reported that they felt there would be a lot of contamination in the bins as well as reporting that litter was a problem at the school. They felt that students needed more education about what to put in each bin and that some students were being lazy or in too much of a hurry for play to be bothered to place the rubbish in the correct bin.

The results of the audit found that there were lots of soft plastics in the bins and that the wrong things were going in the bins. Some members of the Pambula Plastic Patrol had also collected bags of litter that they had found in the few days leading up to the audit – with a large proportion being soft plastics. The students were concerned that instead of reusable plastic containers many students were using single use plastic items.

The students then participated in a action planning workshop where they brainstormed ideas for the school to help in reducing the waste the school sends to landfill: