Jake is a Year 10 student at Bega High School. Yesterday he was test pilot on the Bournda TrailRider and gave it the big thumbs up after a journey up and down stairs and across some bumpy ground!  The Year 10 students will be coming out to Bournda in November for their Crossroads program and Jake will take advantage of the TrailRider to access areas that his wheelchair wouldn’t be able to get to. A big thank you to Jake for giving us expert feedback on the set up of the TrailRider. And thanks to Mrs Harris for organising the test with Jake.. 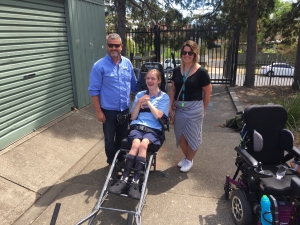 On Monday Bournda EEC received a call from Dr. David Stratton who has pioneered the use of the TrailRider in Australia.  A presentation by David at the World Parks Congress in 2014 was the inspiration for us to get a TrailRider for students who come to Bournda EEC. He was thrilled to hear that we were providing this support to students in our schools and is keen to see some photos of the TrailRider in use. You can check out more about David’s inspirational story in this video.

Acknowledgements: The TrailRider was purchased with contributions from Bournda EEC, NSW Department of Education Student Services, Tulgeen and Tarra Ford.