They came, they soared, they warbled!

You are here: Home1 / Uncategorized2 / They came, they soared, they warbled!

It was a fantastic day and the students from Tathra, Towamba, Tanja and Wolumla Public Schools were fine representatives for their school communities.

EVERY student had a go in the bird call section and there was magic in the room as the students showed off their skills!

The official awards were: 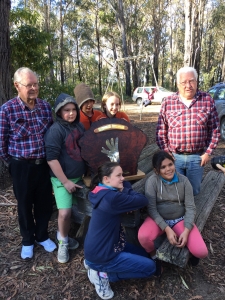 Highest Individual Scores – On the Perch Family Day Passes – donated by Steve and Linda Sass, On the Perch Bird Park.

The scores were very close with only a couple of marks between all the teams.  Tathra PS students were younger so theirs was a particularly meritorious performance.  Vanessa Milton from ABC Open, documented the event – check out Vanessa’s marvellous story on the “Champion Bird Callers of the South Coast”

It was a pilot program but there was a definite vibe that it would be great to continue the event next year and to get more schools involved. Newspaper articles provided by the Merimbula-Imlay Historical Society, show that at it’s peak in the 1950s, the South Coast Bird Days, organised by Merimbula Public Principal Jack Lynch, were attended by up to 700 students and 200 adults!!

Thank you to our prize sponsors and thank you to the Merimbula-Imlay Historical Society for kindly loaning us their Bird Call display and bird call activity.