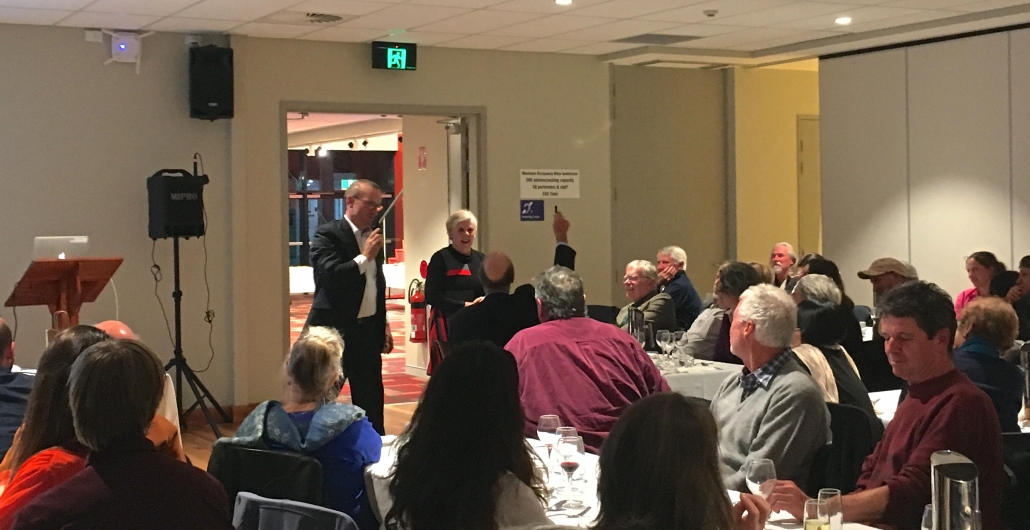 We were having such a good time at Bournda EEC’s 40th (yes 40th!!) World Environment Day (WED) Dinner we forgot to take photographs but luckily Chris Polglase captured some images.

110 people ventured out for the celebratory dinner at the Bega Valley Commemorative Civic Centre and reminisced on 40 years of WED dinners initiated by the inaugural Bournda Principal, Jack Miller, way back in 1978!  The assembled gave a round of applause for Jack’s efforts in nurturing the event for many years.

Welcome to Country was given by Colleen Dixon in the Gulaga Room and she spoke of how important it was for people to remember to look after Mother Earth. Other highlights included the lucky door prize of a hand carved wooden elephant generously donated by Spoonsmith! In this photo you can see guest speaker Dr. John Merson, with hand poised to randomly select the eventual winner, Josh Brown, while Bournda Principal Doug Reckord and Administration Manager Jan Lynch look on.

Our guest speaker Dr John Merson was introduced by Dave Gallan and later thanked by Kim Taysom. Dr. Merson gave a thought-provoking presentation on climate change action, outlining details of the Blue Mountain’s Low Carbon Living project. For those that missed out on one of the brochures John distributed, you can download it here.

Participants admired the stunning display of creative art and writing from local school students, who had recently explored the WED theme of “Connecting People to Nature” at workshops at Bournda.

Everyone agreed that it was a fantastic crowd for a Monday night and indicative of our community’s enthusiasm for giving back to Mother Earth. A good time was had by all!