My Work Experience at the Bournda EEC

You are here: Home1 / Uncategorized2 / My Work Experience at the Bournda EEC 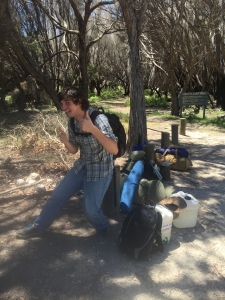 I’ve had a long week at the Bournda EEC. The week started with the Light to Light walk with Karabar High Sport, Leisure and Recreation led by Doug Reckord, Bournda EEC Principal. The Light to Light walk is a hike from Boyd Tower(near Eden) to the Green Cape light station, approx. 30 km. The walk encompasses much of the coastal fringes of the Ben Boyd National Park. This terrain includes soaring cliffs as well as heathlands, and the occasional historical settlement.

The walk was supposed to occur over three days, but due to technical difficulties; these mostly consisting of a bus that couldn’t keep its coolant inside of itself, the walk was shortened to two days. Although this didn’t hinder Karabar’s spirit. The group soldiered on though the second day, walking twice as far as they planned. The next day they finally arrived at Green Cape. They then caught a second bus to Bournda, driven by Doug, and enjoyed a well deserved shower. They headed home early the next day.

Meanwhile the student’s of Narooma Public’s grade 3 classes were just arriving at the National Park. For the first day the students were involved in a program called Significant Environments which included a guided tour of the National Park. Jules Donne and Luke Brown, teachers at the EEC, led the students around the famous sights of the park including Bondi and Wallagoot Lakes as well as Bournda Lagoon and its lookout. At which the students drew their own pictures of the landscape. The students then headed back to the camp for an early night.

The next day the students walked to the lagoon and rotated between three different kinds of activities. Firstly, the Challenge Games led by Bob Harris, EEC.These focused on the student developed teamwork skills and trust in one another. Second the Problem-solving Initiatives led by Jesse French, Naroooma PS. The initiatives focused on problem-solving and lateral thinking exercises. The final activity was run by Luke Brown, EEC and was a biodiversity survey of the lagoon. The students collected marine creatures of all kinds whilst Luke explained to the students the role they played in the ecosystem. The creatures were then released back into the lagoon. After completing the activities the NPS students walked back to camp, packed up, and with a final goodbye left.

All in all my work experience was tiring but immensely fulfilling. I think I came out of the experience better understanding the relevance of environmental education both in and outside of the classroom. I hope to return to the EEC soon although I think next time I’ll leave the teaching to the professionals.

(Thanks Liam, your work was much appreciated and helped us in a very busy week.  A big thank you to Mrs Morgan from Bega HS for organising Liam’s work experience.)